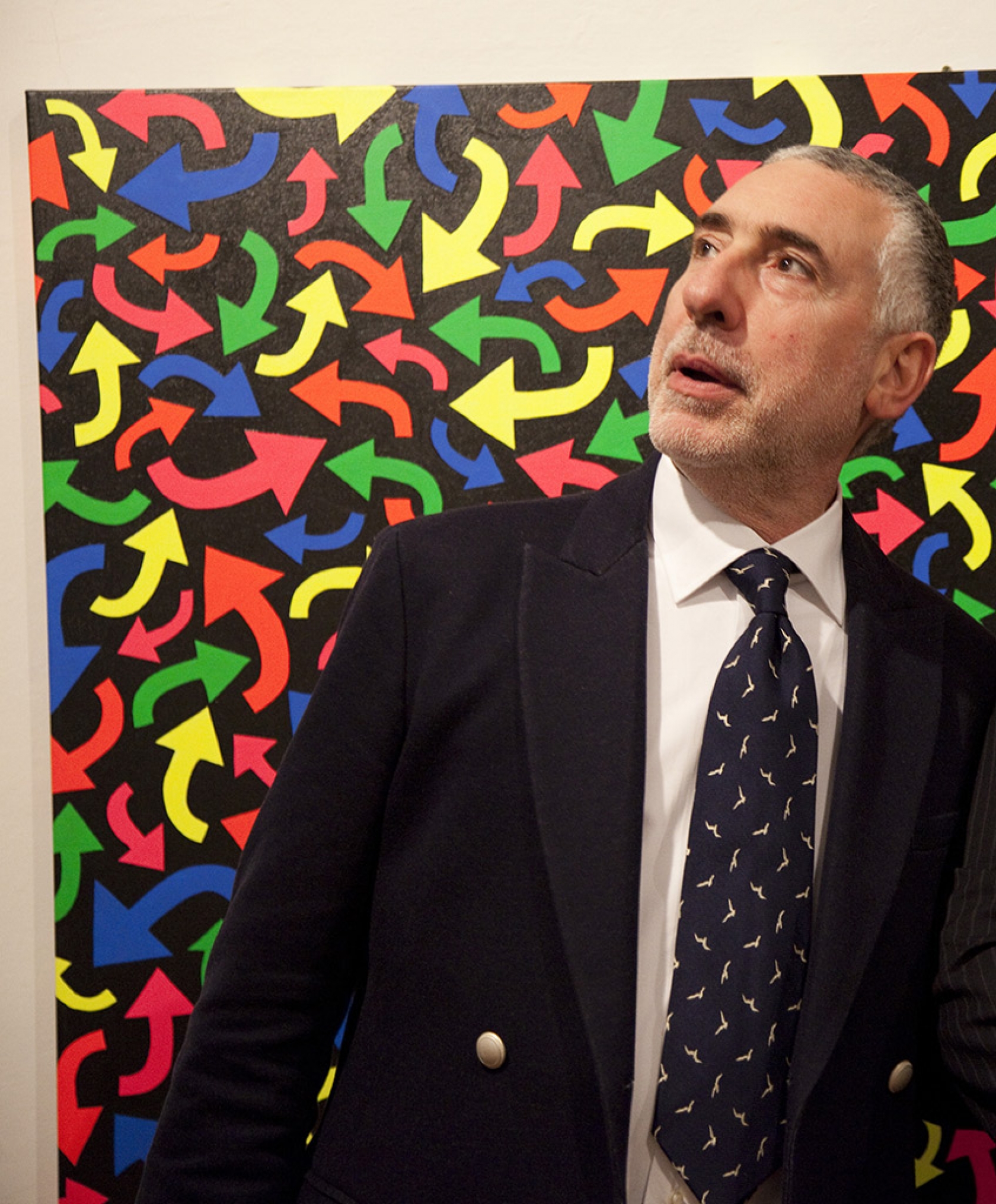 Sergio Cavallerin is an artist whose innate calling drew him very strongly towards images from a very young age, pursuing all self-realisation in the realm of visual expression.
Thus started his collaborations with prestigious advertising agencies, Italian and foreign newspapers and magazines as graphic designer, illustrator, cartoonist and comics artist.
He was immediately eager to investigate in depth all aspects of artistic depiction, using painting techniques as well as the camera lens, with the addition of successful forays in multimedia with the help of music and film.

He likes to describe himself as a populariser of comics art – that is why, in the 1980s, after launching the humour magazine “Tratto”, of which he was also the director, he was one of the founders of the Star Comics publishing house.
At the same time, he strove to introduce the Italian public to foreign comics (especially American comics and Japanese manga); this effort led him to found the book and comics distribution company Star Shop in the 1990s, still the leader in the Italian distribution sector.
These two decades also saw the artist receive awards and accolades for his way of marrying humour with art, from Bordighera to Warsaw, and from Belgium to Cuba.
In 2000, he published LEVITAZIONI [Levitations], a collection of more than 300 cartoons and humour illustrations, some of which are permanently displayed at the House of Humour and Satire Museum in Bulgaria, at the UN Gallery in New York, in Legnica (Poland), and at the Aydin Dogan Foundation in Turkey.
At that time he also created the Polimeri [Polymers], series of labyrinthine images of signs that draw the viewer into a reflection on fundamental questions.
They are large acrylic paintings on canvas and they have all been exhibited by important Italian galleries and prestigious exhibition halls: Lingotto (Turin); the Environmental Fair (Frankfurt); the International Art Exhibition at Fortezza da Basso (Florence); Palazzo Vitelli (Città di Castello); Art Verona; M'Arte Gallery (Pistoia); Kunsta Art (Bozen); Galleria Contemporanea (Pescara); Spazio Papel (Milan); Italian Culture Institute (Los Angeles); Villa Francesca (Malibu); Maschio Angioino (Naples).
In 2007, he published FELINEIDE, a collection of paintings dedicated to the universe of his beloved cats, where the images are perfectly complemented by the texts of Vincenzo Mollica.
The poetic tribute to felines turned into a series of exhibitions throughout Italy and abroad.
The book CATS appeared in 2012, with colourful, symbolic, Pop Art-inspired whimsical compositions that embody the close bond between Cavallerin and cats.
The image of the cat becomes a sort of guiding light for introspection and meditation on the world around us.
The artist also illustrated books such as PINOCCHIO MON AMI [My friend Pinocchio] and ALBA.
His multifaceted artistic personality and interests led him to revisit his own history and reimagine the aesthetics of comics with a pop slant, following in the steps of Warhol’s “icons”; his comics heroes rose to a contemporary, ideal Pantheon and inspired the Love for Comics paintings.
It is only in the past few years that Cavallerin has made the definitive switch to the world of art, by approaching shaped canvases; these form the prerequisites for walking in the steps of the Gods and continue the creative experiment started in the 1950s with Alberto Burri’s “I Gobbi” [”The Hunchbacks”], masterfully taken up by Enrico Castellani and Agostino Bonalumi.
Cavallerin seeks to go beyond, to give a perfected form to the images that his predecessors had conceived, urging viewers to go through the canvas’s wormhole, on the actual border between painting and sculpture.
The intuitive, minimalist avantgarde in early 1960s America are completed, rendered legible, tangible, almost banal and trivial; and this is where the artist’s genius steps in: the return to reality.
Not the reality of the 1800s, of Gustave Courbet’s realism or of the Italian verismo, but the iconographic, thunderous, abrasive reality of social media and of filmed comics adaptations; the “Superficidinamiche” [“Dynamic Surfaces”] appear, a leap beyond Pop Art.
The first works exert an attraction on the viewer that resembles that of magnet on metal – they are objectively fascinating and indeed, appear to have been forged from metal. They range from the symbols of Batman and Superman to the faces of Spiderman and Mickey Mouse, to Facebook’s logo, with an emphasis, however, on Made in Italy on a blindingly white shaped canvas.
The surfaces are alive and shimmering, sensitive to each imperceptible change in light; their aspect changes with the viewing angle, in an eternal renewal.
The work feeds on light and gives its expressive force back, changing and transforming depending on the will of the observer.
One understands that Cavallerin does not borrow pop icons to ride on their success and facile recognisability, but that these images are his background, separated – much like his works – by the canvas/placenta, human and supernatural at the same time.
We know that he fought tooth and nail to free the world of sequential art and graphics from the low-brow, archontic sub-culture taint that it has always been captive to, especially in Italy.
His visionary and innovative entrepreneurial project, as one of the founders of Star Comics and Star Shop Distribuzione, takes its cue from advertising, satirical cartoons and the interest in drawing that showed him his path from a very young age.
It should come as no surprise, therefore, that another innovator such as Stan Lee, a giant of American comics and founder of Marvel, when he met Cavallerin in his native Perugia a few years ago, described him as Superhero Sergio!
Today, Cavallerin feels the need to move forward, towards developing a language based on the multimedia platform of his superficiedinamica, the dynamic surface, albeit with continuous necessary upgrades.
In fact, the first series set the icons of our times and of the artist’s world; now he wishes to leave a strong message to do with man’s spiritual sphere: he uses the new Pop Art as an MS-DOS command to prompt viewers to think and to define a profound concept with contemporary, or even futuristic, cognitive methods.
The work actually becomes the 3D embodiment of the crossbred, virtual and synthetic language of Social Media, GIFs and Real Time. His objective is to leave a permanent object in a world made up of bits and algorithms, moving at the speed of light.
In fact: “The ashes of time”.
The artist lives and works in Perugia.